I did quite a bit of research before buying a van, and to give credit where credit is due, my boyfriend actually got me started on this entire idea of van life and van dwelling. I wasn’t aware of it until early 2016. As soon as I heard about it though I knew I wanted to do it. As my trolling on social media turned into real research on blogs and message boards and then eventually shopping on Craigslist, I had an “oh shit” moment. As in, “oh shit, I can actually do this and totally am going to.”

Choosing the van was tricky. My dream van would be an extended Mercedes Sprinter, but as a gal in her 20’s let’s be real, I couldn’t afford that and even if I could, I had no where to park that rig in Capital Hill.  While vintage VW Vanagons were AWESOME anything I could afford were super old and unreliable, and knowing that I have zero mechanical skills, I was hoping for something a bit more modern.

I then moved onto to cargo vans and while those seemed like they would be awesome, lacked the height I was looking for (I’m 6’1″) and again presented a parking problem.

And then, it what seemed like a moment of serendipity, months after gaining interest in this project, I stumbled upon a Ford Transit Connect used as a catering van. And BOOM. My mind was made up. The size was small, but reasonable considering I lived in the city. The height was a good compromise in between the Dodge cargo vans and sprinters AND they were substantially more affordable than other used vans I looked at. I bought mine for $8,000. It needed some tune up work but otherwise, mechanically sound.

Now, as the corny person that I am, I felt that the van needed a name. It was after all, representative of a lifestyle change and a big project. After a few weeks of working on it, I have decided to name him, Harrison Ford. Ready for any number of cross-continental adventures. 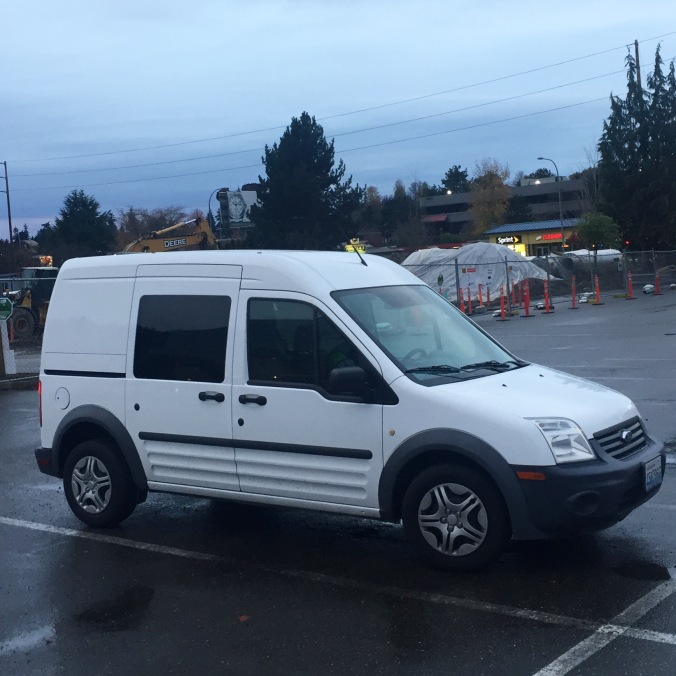 4 thoughts on “Choosing The Van”